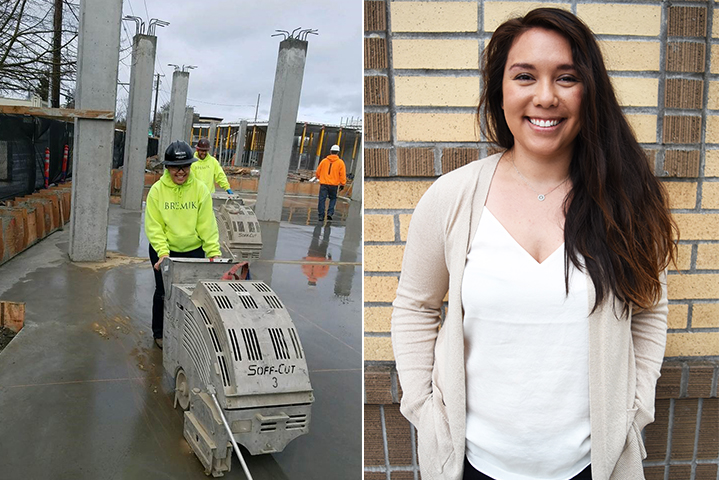 Sara has been with Bremik since 2016 and is currently Project Engineer for the East Gresham Elementary School project. Sara grew up in Medford around predominately contemporary buildings, and it wasn’t until she visited Portland that she realized structures could be architecturally and technically interesting. Initially planning to be an architect, Sara soon realized it was the technical elements and not the design details that intrigued her most.

Her first real exposure to the world of construction was through an internship with a general contractor while attending Oregon State University for Civil Engineering; Sara changed her major to Construction Management after experiencing how she could have more hands-on interactions with the building and engineering process.

Since joining Bremik, Sara has had many opportunities to pursue this hands-on knowledge. She has gone through training for Navisworks and Trimble, and her role as Project Engineer on Lents Commons allowed her to be on a project from inception to completion. This field work helped her learn to process submittals and change orders, work with subcontractors, and close out a building at the end of a project.

Though Lents Commons provided Sara many opportunities, she still faced initial challenges in the field due to her age and gender. “Most Project Engineers out of college experience the age issue, but I’ve also experienced being a woman in the industry. The men who work for subcontractors aren’t used to having a female PE onsite, and when they have a question, they don’t come to you or think you can help answer their question…It takes a while for them to catch on that I can be a resource,” Sara says.

Much of the adversity Sara has faced was overcome through the support of the onsite superintendent and being unafraid to assert herself. Sara also believes her ability to show she is knowledgeable while remaining receptive to learning new skills from the crew was helpful. Ultimately, her favorite thing about being in the field at the end of the day is the connection she makes with crews and being able to learn firsthand from them.

Aside from her work with Bremik, Sara serves on the Advocacy Board for Portland YouthBuilders, a local nonprofit that supports individuals age 17-24 who have experienced poverty, violence, drugs, hunger, and/or loss and are committed to becoming self-sufficient despite those setbacks. She is also a member of the National Association of Women in Construction. When she’s not working or volunteering, Sara enjoys going hiking, to the gym, and to local sporting events. She also loves knitting and spending time with family and friends.